skip to main | skip to sidebar

Fly Away Peter, Fly Away Paul

Jet-setting towards some kind of new existence, mile-high in the land of the flying monkeys. Evolution is next to godliness. Long moments transpire since last steadfast here. New worlds explode into existence, and old roads linger like ghosts. Where is it that you're taking me? Goin' out west.

Cabin crew prepare for our descent into madness. Words come easy at thirty thousand feet and a window seat. 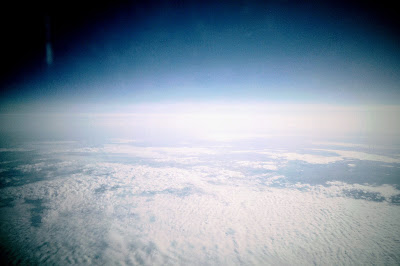 In a dusty corner, cleaning collecting back home, ready for the big move, there emerged an old camera. Engraved upon the side were branded the words Zeiss Ikon. Some research determined a vintage of around the 1930's. A grandfather's abandoned toy.

Some film! Old 120 film, medium format, still available knowing the right source. Fumbling through the loading and unsure of outcomes, the old folding body snap snap snaps, all manual, and guestimational focus. An old dog put through the paces once more.

Technology's evolution of the eye. A fossil record. 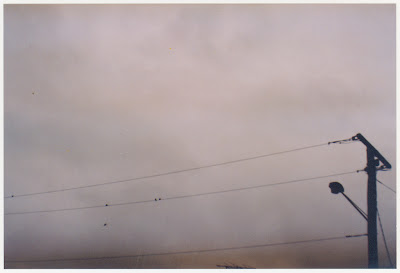 Photographed some tadpoles today. No good ones though; needed a polarizing lens & a macro. Noticed the wrigglers in the pond a few days ago, but didn't tell a soul. I wonder who else has seen them. I wonder who else even cares to know. Quite certain they're frogs and not toads, but somehow sometimes who's to say what they'll become in time? What will we all?

Conversation steering at dinner, we arrive quite pointedly at the possibility that sometime in the future there may come about a device that is able to determine and visualise all occurring moments in history, from the dawn of time to the press of the button. I propose the possible evolutionary path that such a device might take over millions of generations; from mobile phones to self-replicating mind-machines. Ultimately it is surmised that the consciousness of every being may be merely be an agent of these futuristic history machines, magnetic heads zipping away, recording through the ages, and that we are just now at this current particular part of the tape. Perhaps she thought me mad by the end. 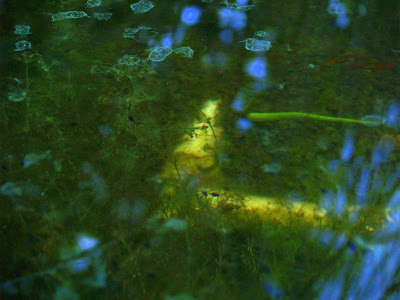 Murky lies the heavens hovering just above the surface
by Joshua at 2:34 am 0 comments

Contemplations arise, the future of the big scribble, of writing. Conventional, classical clashes with the mortal coil.

Some characters though, some characters, come to life! Mary Shelly's monsters of the mind. Let them grow I suppose.

From what single celled neurone flashings did these derivative derivations divide? Millions cubed played out their three dimensions. Paved paths followed, and followed once more recurring, a little to the left, a little to the right, branchings towards a perfection they imagine themselves to be.

And here they are to haunt me. 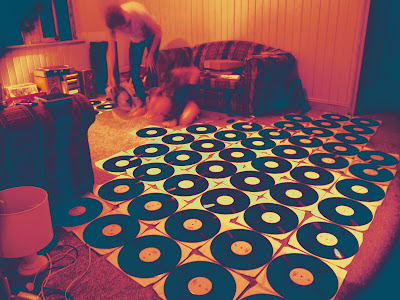 Staring from the twenty-first floor I see them. The horizon highway resembles some kind of twisted ant trail. Workers & soldiers, drones & new queens, off on their way to build the colony. Precise roles are unbeknown -- for the most part -- in the building of these social monoliths.

Off from duty in one of the taller chambers of the anthill, I sat still for a second. The friendly strangers scuttled by.

Who were they? Where were they going? What part do they play in this cosmic mound?

Inspiration from Amelia, a strange friend of mine, set me on an imitation stealth photography mission, I'd always wanted to try. The strangers in some way become the stars. The people I'd never meet somehow still have influence.

More daunting than you might imagine, I managed to snap a few, without too many sideways glances. One seemed strangely familiar. Of all the ants in the mishmash nest..

I wish I could say it was Amelia, if only for the elevated irony. It was my friend Dan, and we went and bought a Boost Juice smoothie! Sweet! 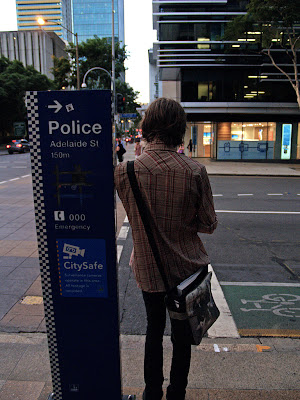 Familiar spirit
by Joshua at 1:00 am 0 comments

All life is replication & adaptation.

Finding myself royally stuck in traffic thismorning, and receiving little consolation from whatever morning radio was blasting over the local airwaves, thought I'd turn to tuning in some kind of podcast through new Google Listen on the Android phone.

First result was an interview with Susan Orlean, straight away that name raised an army in the brain. If you haven't seen Adaptation. go watch it now.. I can wait.

Eyes off the road a split second, a quick search for the first thing that came into my head, Twitter of course. 5.81 megabytes later of mp3 encapsulated audio data, replicated itself there on the SD card. Chickens, Twitter, and a new follower in the biblical sense.

Dear @susanorlean, yes I did once -- a long time ago -- download your Orchid Thief book without paying for it. I did however read only about a page or two of it. Does that make it less wrong, or more? Never fear, I'm buying a copy now from Amazon.

Figure it may be of use, along the road somewhere. I'll keep it in mind. 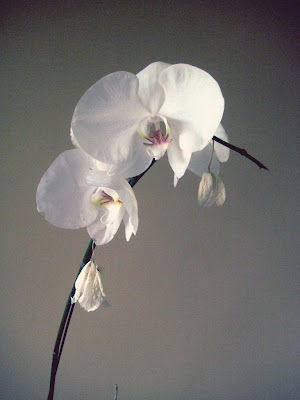 Stealing likenesses of soul
by Joshua at 11:34 pm 1 comments

Pegged To The Line

We all felt a little pegged that morning after. Pegged to the line, as they say. Or perhaps some might say someday, as part of the newspeak. A generic phrase forged some sunny afternoon between Muggins, myself, and Dan, thinking of a variety of new slang and generally observing the backyard washing line.

Emotions ran high, burnt hot. Goodbyes to Mel & James again, off to become Londoners, pick football teams, get into bar brawls. Some prophecy looms that they'll be back before six months is through, though we wish them all the best on their journey across the pond.

And so, still strung out, we hang, out to dry, on the line, pegged, waiting for our day in the sun. 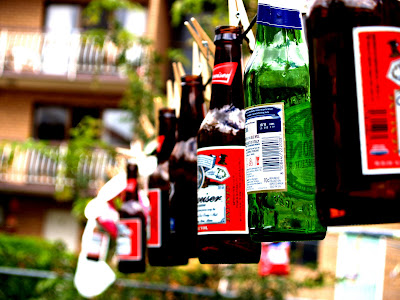 And maybe I seem a bit confused. Well, maybe.. but I got you pegged
by Joshua at 5:40 pm 0 comments